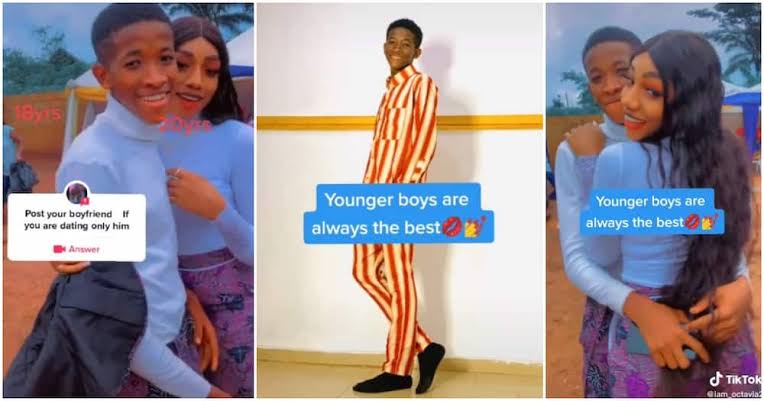 A Nigerian lady has caused a stir on social media after sharing a video of herself and her 18-year-old lover.

Both lovers were captured in a short mashup of images accompanied by the caption “Younger boys are the best”.

The lady identified as Stephanie also posted the clip with a bit of advice for her followers as she said, “We need to change that perspective of older men with younger girls”.

The clip had over 150k views with 13k likes and more than a thousand comments as at the time of filing this report.

Reactions: Will you respect him?

Several commentators seem to agree with her while others expressed doubts about the relationship.

@Peacespyce aligns with her by saying “As long as he is responsible and you respect him…. you’re good to go baby… Enjoy yourself”

“a simple lesson to learn, age doesn’t matter In a relationship only love does” is the comment from @Precious Ifeoluwa

@Joy Ohilebo147 thinks “They are more understanding.. always want to make you happy”

@Obioma Goldfish doubts if both lovers can thrive together “The problem is, will u respect him? Will u take his advice?”

@Sologidi Paul seems to be interested in such a relationship “I am young. If I can see someone like you I will be happy oo”

@Georgy also wants a taste “Where I fit find one abeg.. I can love ehnn just be spending money on me”

Meanwhile, an angry woman has dragged a man to court for not showing up