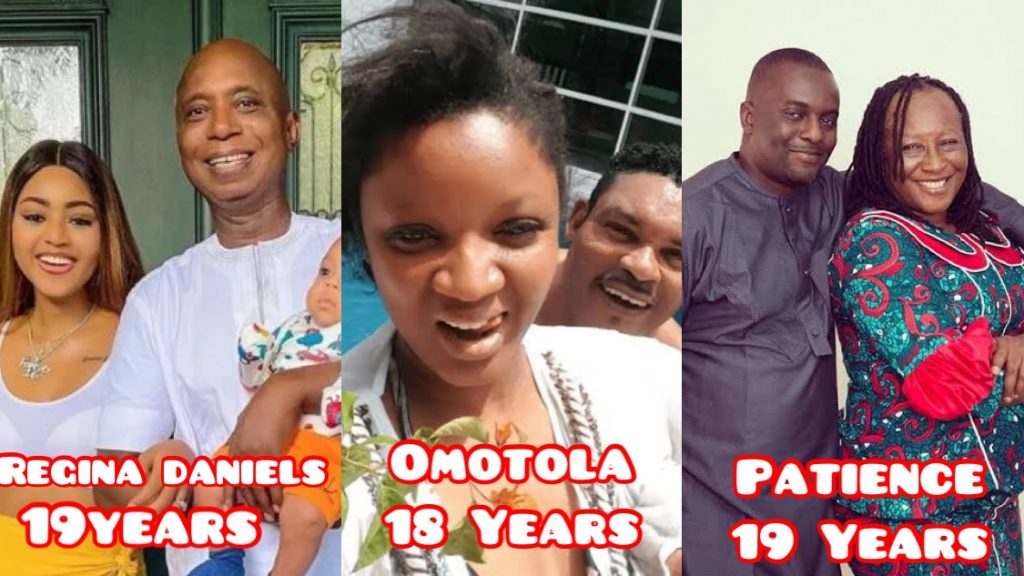 Back then during the ’80s and ’90s, getting married at a young age was very common. In those days, women who are still single after reaching the age of 18 are made fun of.

In recent times, civilization has changed the narrative of getting married at a young age as most women get married in their 20s, some in their 30s.

Famous Nigerian actress, model, and movie producer, Omotola Jalade Ekeinde is one of the movie stars that found love at a very young age. The mother of four got married to her pilot husband at the age of 18 but met each other at the age of 16. The beautiful actress had her first child at the teenage age of 19.

Regina Daniels is a famous Nigerian actress, brand influencer, and fashionista. She is one of the actresses known to be married at a teenage age. The young movie star got married to a Nigerian businessman and politician, Ned Nwoko at the age of 19. Her marriage is blessed with a cute son.

Famous movie Shan George got married at the tender age of 16, she is blessed with two male children. The legendary Nigerian movie star is currently divorced and living as a single mother.

Elizabeth Benson Ameye is famously known as Liz Benson. She is one of the most talented actresses who thrilled in the ’90s. Liz Benson got married to her first husband, Samuel Gabriel Etim at the young age of 17. Her marriage with Samuel Etim ended after she lost him to death in her mid-twenties. She is currently married to Bishop Great Ameye. The 55-year-old actress is blessed with lovely children.