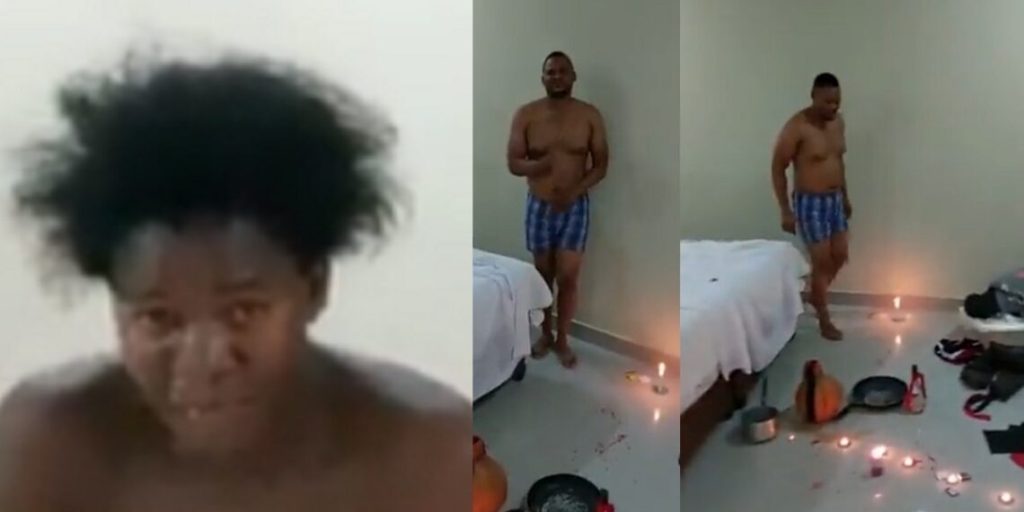 A video making rounds online shows the moment a man bumped into his wife sl#eping with another man who’s said to be a pastor on their matrimonial bed.

According to reports, the incident occurred in Zambia .

In the viral clip, the pr£gnant woman identified as Martha could be seen stark n@ked while the pastor who reportedly hails from Congo quickly wore his shorts upon seeing the lady’s husband with the camera.

On the floor, candlelights could be sighted, what a lot of people and sources claim to be in line with the ritual that was ongoing during their intercourse.

At the time of filing this report, the video is currently trending on the micro-blogging platform, Twitter and Nigerians are already giving their opinions as regards the shocking and shameful act.

A report from Zambia Online reads:

MARTHA WAS BARREN AND CONGOLESE PASTOR HELPED IN MAKING HER PREGNANT

New information suggest that the trending video, in which a lady identified as Martha who was begging for mercy from her husband after being caught red handed with another man, was actually performing The last Ritual for safe Delivery.

sources say the 2 individuals, the ungodly papa and Martha were performing the last ritual, as she she was barren for sometime and the Congolese pastor assisted In bringing the fruit of the woman