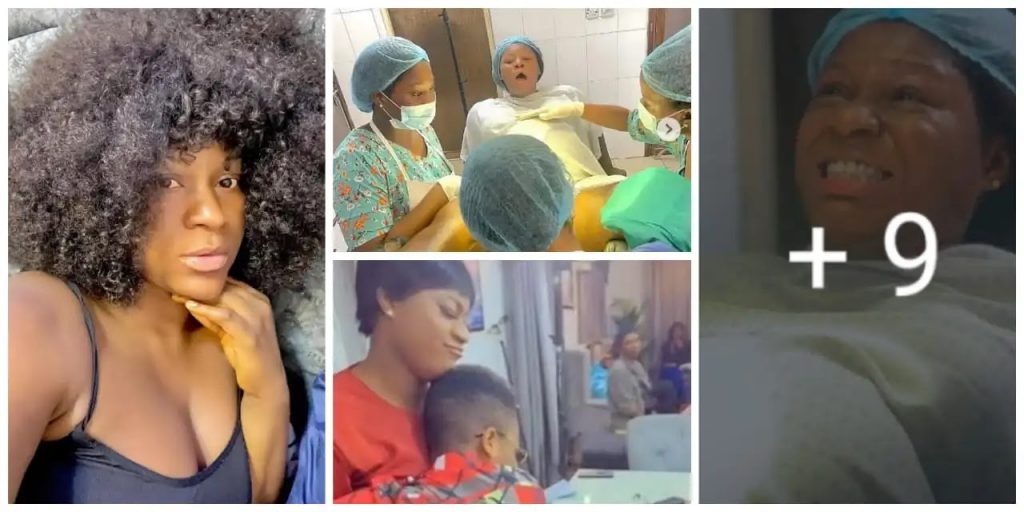 Many people does not really know that a famous nollywood actress who is popularly known as destiny Etiko has a son. Well, today is the boy’s birthday and I will be sharing some pictures of him and his mother, Destiny Etiko.

Who is Destiny Etiko son

In this article, I will be sharing pictures of destiny Etiko and her son.

BiographyDestiny Etiko is a Nigerian actress best known for her role in the hit movie “Idemili.”

She steered into the Nigerian movie industry, Nollywood, in 2011, registering with the “Actors Guild of Nigeria.”

During her professional acting conception, she featured in minor roles in several Nollywood films before landing the lead role in the movie “Idemili.”

Etiko was born in Udi, a village located in Enugu state, a southeastern geographical area of Nigeria occupied predominantly by the igbo people of Nigeria.

Destiny Etiko is not married and the Actress has said people should stop linking her achievements to men because she works extremely hard and gets several brand ambassadorial deals.

“It is funny because I work for my money and I get good endorsements. If it is easy for men to give one money, then go and collect money from men. I work, make my money, and some people appreciate me..“I just got an endorsement deal with a Chinese company that deals in sanitary pads and baby diapers. When I achieve something tomorrow, people would say a man gave it to me. Let them keep talking. Even if I don’t achieve anything, it is still the same people that would say after all the films I have been acting, I have not done anything for myself. I don’t want to take it seriously.”

In another interview, Destiny Etiko revealed that she wants to marry a man who can understand her love for acting. She added that she is not ready to ditch her career for any reason; not even marriage or any man can make her leave movie acting.

ChildrenDestiny Etiko has an adopted daughter, Chinenye Eucharia but no known biological child.

Mr. John Anonde Etiko is the name of Destiny Etiko’s late dad and her mum is Eucharia Etiko.

Here’s a photo of her mother together with her sister during the funeral of their father.

Etiko received both her primary and secondary school education in Enugu State where she obtained her First School Leaving Certificate and the West African Senior School Certificate.

Etiko then applied to study Theater Arts In Nnamdi Azikiwe University located in Awka where she graduated with a degree in Theater Arts.

What You May Not Know About Destiny Etiko

Etiko described in an interview, that after registering with the Actors Guild of Nigeria she ventured into the Nigerian movie industry commonly known as Nollywood in 2011 and described her experience then as a difficult one because she had to combine her acting career with her school requirements as she was still a student at the time.Destiny Etiko in an interview, revealed that her mom was once vibrant in Nollywood and she was the one who paved the way for her. “My mother, Eucharia Etiko, started acting in 2004. She did not act in major roles and her acting career lasted for just three and half years because it was difficult for her to go on set and come back at night to attend to her family. She continued, “Whenever we were on holidays, my mum would ask me to follow her and hold her bag whenever she was shooting. I followed her on three occasions and I featured in some cameo roles. I had minor roles as an adult too but I finally got a better role in 2012. 2015 was my breakthrough year as I started receiving regular calls from people who wanted to feature me in their films.”

She also said, “Growing up was not easy. My father was a headmaster doing well and at some point, he worked with a firm as a treasurer where he was accused of theft after the money he was asked to take to the bank was stolen by armed robbers who attacked him on his way. My father had to pay for money he never took. It was an issue as we had to move out from the flat we were living in to a ‘public’ house. My mother had stopped acting and we started living off the proceeds of the shop my father opened for her,” she said recently in an interview.

MoviesDestiny Etiko has shared screens with prominent Nollywood actors and actresses such as Ernest Obi, Cynthia Okereke, Yul Edochie, Destiny Etiko, Patience Ozokwor, and Eve Essien, and even the legendary Pete Edochie, the list goes on.

Destiny Etiko is among the wealthiest and most influential actresses in the Nigerian movie industry, with an estimated net worth of $100,000 – $500,000.