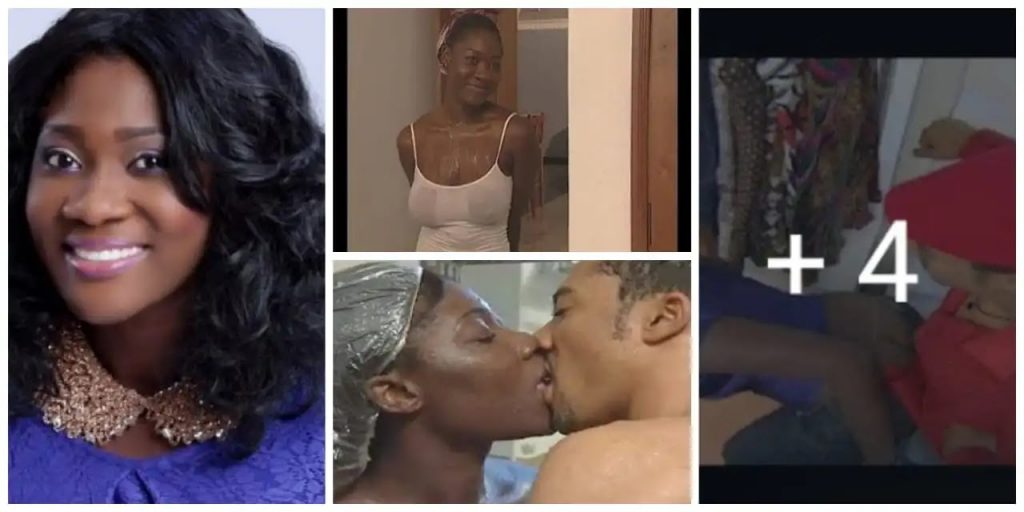 Popular Nollywood actress, Mercy Johnson is married, however, before she tied the knot she dated some men with most of these men being her colleagues who are also in the movie industry.Majid Michel

It was once alleged that Mercy Johnson was in an amorous relationship with Ghanaian actor, Majid Michel. They were even reported to have purchased a house together where they would have lived if they had gotten married.

These two played some roles in quite a number of Nigerian movies. Due to their closeness, it was once rumored that Mercy was dating Benedict. Benedict came out to debunk these claims and to quashed everything, they both married their respective spouses.

The fine actor once admitted that he was interested in going out with Mercy.

Mercy Johnson: I Stopped Playing Romantic Roles, My Husband Doesn’t Like Them

Nollywood actress, Mercy Johnson-Okojie, is one thespian that has stood the test of time. And what is going for her is her talent and versatility.

From her role in The Maid, a movie that launched her into stardom, Okojie has featured in several movies, garnering awards both locally and internationally.

In this chat, the Senior Special Assistant (SSA) on Entertainment, Arts and Culture to Kogi State Governor, Yahaya Bello, opens up on her career, marriage, new epic film, ‘Inipki’ and other sundry issues. Enjoy it.

Could you tell us about your new movie, Inipki, what is the concept behind it?

The movie is in connection with my job as Senior Special Assistant on Entertainment, Arts and Culture to Kogi State governor, His Excellency, Yahaya Bello. He said every sector must be operative to make the state a haven for tourism and entertainment. I believe culture exists before religion, so we have to go back to our root as a reason to draw us closer. That’s where the idea for the talent hunt came. After the talent hunt we realised we had more people in the movie sector, so we decided to bring heavyweights in filmmaking such as Sam Dede, Saidi Balogun, Paul Obazele and award-winning film director, Frank Rajah Arase. We then decided to shoot an epic movie to portray our root and showcase the rich culture and tradition of Kogi State, instead of shooting the regular conventional story. That’s how we chose the movie titled, ‘Inikpi’.

Could you elaborate more on the movie?

It’s about a respected princess in Igala, Kogi State, who laid her life down for the peace and tranquility of the people. The story captivated me, so I decided to take it as a personal project, as a contribution to my state as an actress and also to encourage the young ones to know more about the legends literally and histrionically.

What should viewers expect from the flick?

It’s a topnotch movie and they should always expect the best from their own. However, the movie has started to gain acceptance from the social media. We are delighted that the flick is making waves.

You have distinguished yourself as an actress, what would you say is responsible for your achievements?

Honestly, the grace of God has been my pillar of strength. I don’t have anyone to thank for my achievements, but my creator for paving ways for my success. He is helping me to live a sustainable life and giving me reasons to appreciate His mercies upon my life always.

Also, I must appreciate God for connecting me to a man that complimented and transformed me into a better person. He has a different perspective to life, which has affected my life positively, and I owe a gratitude to my husband for his love and affections.

What do you think makes you stand out?

It is persistency, hard work and passion for my job.

Are there any experiences you had as a child that made you cry as an adult?

I’m just a regular girl next door, nothing special. Though, growing up was tough, it made me a better person. It made me strive to succeed, it taught me hard work, perseverance and also educated me to understand that my purpose on earth is to serve humanity, which was one of the strongest lessons I learned in life.

You have played countless roles such as maid, gangster and lover to mention a few, how does your husband react to your movies?

My husband doesn’t watch my movies. But I think he has heard about the clown I am in movies (laughter). Nevertheless, I adore him for being my backbone and supporter of my career. Though, for the past eight years of our relationship, I haven’t featured in romantic roles. This is because he doesn’t like it and I can’t do it for all the money in the world.

How would you describe your husband?

He is a very humble man, friendly and calm. When I’m doing the crazy things, he looks at me and shakes his head. In fact, he is a gentleman, he is not dramatic at all and he always tells me he doesn’t understand from where I get all my dramas. Sometimes, he asks me ‘you don’t get tired?’ You know, I play too much. Nevertheless, my husband is the definition of God’s plans for me on earth; he gives me peace, love and happiness. In fact, he is my destiny.

Every marriage has its challenges, how do you settle disputes?

When I offend my husband, I jump on his body and he laughs. I may also write a message and paste it on my daughter, Purity’s back (laughter). Honestly, the man is tired of my pranks (laughter).

How do you create a work-life balance?

I operate on a scale of preference regarding my service to God, family and job. My family has to be comfortable before discussing my job. I must appreciate my husband, Prince Odianosen Okojie, for giving me his consent when my appointment as SSA to governor came, knowing fully well the sacrifices and adaptations he will have to put up with.

How do you relax?

I play Ludo game or swim with my husband. Also, I relax with my kids, playing and discussing school activities with them.

How has it been working as Senior Special Assistant on Entertainment, Arts and Culture to Kogi State governor?

Like I always say, the honorable doesn’t count but the impact you can make in the lives of people. When I received the appointment, I was enchanted for the honour. So far, it has been fun working with Governor Yahaya Bello. Nevertheless, I have been executing my duties in the entertainment, arts and culture sector, to give Kogi State a new face, just as our leader has instructed.

What is your advice to Nigeria women?

They should embrace God to make everything beautiful in their lives. Also, live a positive life; no matter what life throws at them, they must put God first for solution.