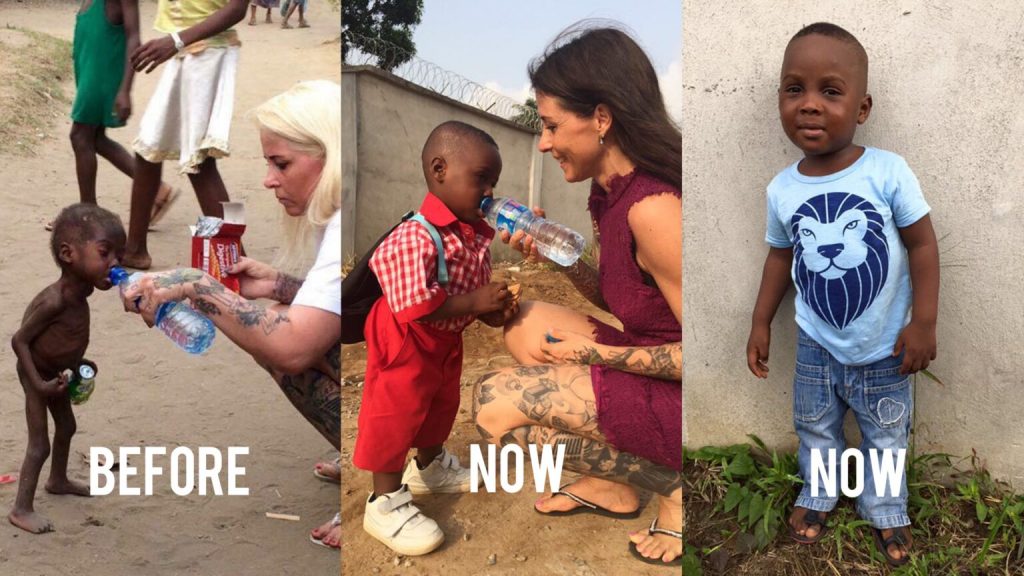 In late January 2016, a Danish aid worker went on a rescue mission on the streets of Nigeria and discovered a starving child on the edge of death. The moment was captured in a haunting photograph, in which she tilts a water bottle toward the frail young boy’s lips. One year later, the same, then starving kid, is starting school after a full recovery, and a recreation of his first photo shows just how far he’s come.

Anja Ringgren Lovén works for an organisation called DINNødhjælp (‘your relief’) which found the abandoned boy, appropriately named Hope. They rescue children labeled as ‘witches,’ who are often tortured and killed by their own poverty-stricken parents. Some religious leaders in Nigeria accuse children of witchcraft in hopes of charging poor families for supposed exorcism services, an epidemic Anja and her team combat by sheltering the witch hunt affected children.

We previously wrote about Hope’s journey hereand here. Take a look at his timeline below, and see how just one year of love and care gave him a completely fresh start.

Remember the starving, abandoned child found in Nigeria in January 2016? This is his first day of school, exactly one year after he was rescued by Anja Ringgren Lovén The boy, named Hope, was left to die by his parents after being accused of ‘witchcraft’ He was taken to the hospital immediately, and was treated for malnutrition and stomach worms Just 8 months after his discovery, he started to gain weight and regain his energy Hope made a full recovery, and is barely recognizable from before But really, who could accuse this face of anything evil? The orphanage, run by Anja Ringgren Lovén and her team, proved to be a loving home for Hope Anja works for DINNødhjælp (‘your relief’), a Danish volunteer organisation active in Nigeria “All children have rights and those rights must be protected, always,” Anja writes on Facebook