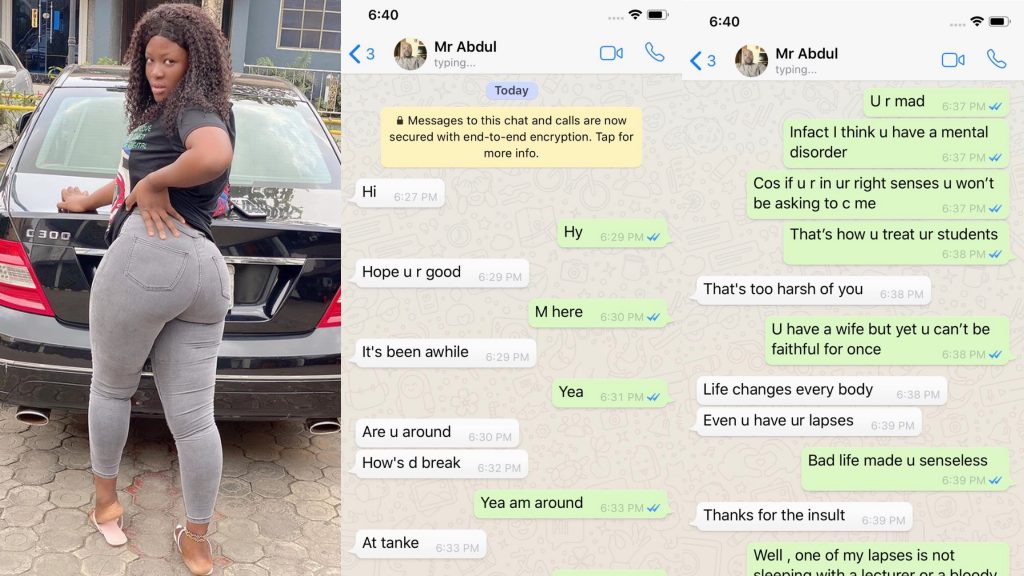 A Nigerian woman identified as Busayo has shared a conversation she had with her lecturer yesterday.

Busayo who identified the lecturer as Mr. Abdul, said he failed her in his course, after she refused to sleep with him.

The conversation clearly shows the lecturer trying to ‘beg for forgiveness’ from Busayo, but she was having none of it.

Busayo in the conversation called the lecturer unprintable names, apparently, she’s still angered by the treatment Mr. Abdul meted on her.

“I really don’t think you deserve all this. Stop being like this. Seeing you is for just to beg for your forgiveness. Not good to sound this way”, reads a message Mr. Adbul sent to her.

Many people have argued that the story is incomplete, accusing the woman of intentionally removing the main ingredients in the chat.

Netizens are saying, she probably slept with the lecturer, and he still failed her which could be the reason for her anger.

Someone on Twitter said, “If he truly failed you, I don’t think the lecturer will have the confidence to still buzz you and ask to see you tomorrow”

See screenshots of the Whatsapp conversation below: