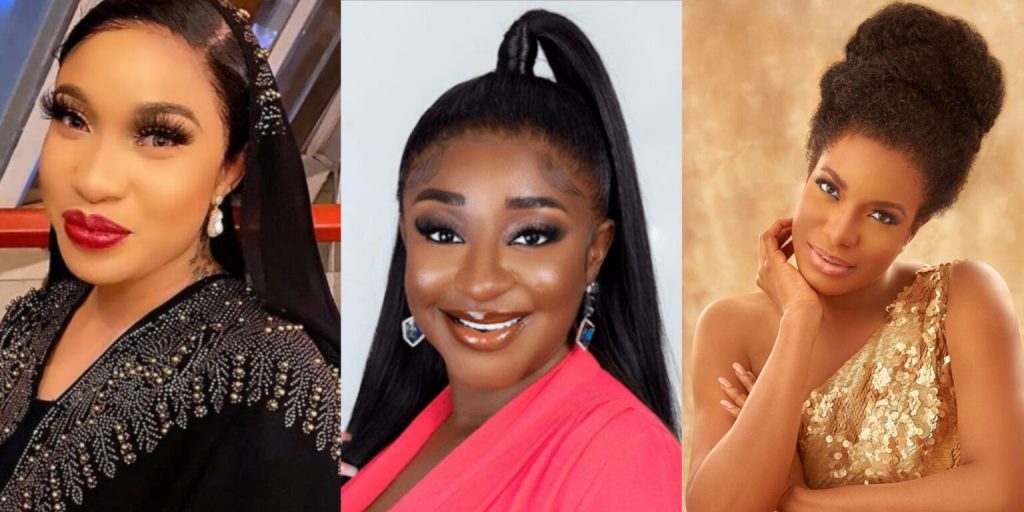 Here is a list of 5 Nigerian Female Celebrities Who Became More Successful After Divorcing Their Husbands. The successful life of Toyin Abraham, after her divorce from Adeniyi Johnson, is not a surprise to people as she has been known for exploits. She’s been known to be a hard working Yoruba Actress, a producer, and a business tycoon.

Toyin Abraham met Adeniyi Johnson 2012 on set of one of her movies, they took interest in each other and ended up marrying each other a year after.

It was a blissful marriage and every thing looked perfect. But the truth was that things were not as perfect as they seem. Not long after, the marriage began to show some cracks and it became unbearable and within a year and six months into their marriage, they were already singing a song of divorce.

There were lots of controversies over the reasons of the broken marriage of Toyin and Adeniyi. It was alleged that Toyin accused Adeniyi of cheating and temporarily left him, she came back after a few months claiming everything was back to normal, with pictures of them together on social media, just to have him cheat once more and was caught in the act by Toyin which lead to the final separation.

Others claim that the age and status difference was at fault here as Toyin is older and more advanced in the industry.

Toyin fought the trauma that came with her divorce and then changed her identity from Toyin Aimakhu to Toyin Abraham. She described it as a personal decision that she had the blessings of her family. I Give You 48Hrs’ – Actress Mercy Aigbe Threatens To Dump Lover And Declare Herself Single If He Fails To Do ThisThe fear of the unknown in marriages scares away lots of singles from settling down and building a family life. Popular screen goddess, Mercy Aigbe who has earned her name from her talented display on screen is listed among the celebrities who did not let their broken marriages ruin their careers. The 7 year old marriage of Mercy and Lagos-based hotelier, Lanre Gentry allegedly broke down over domestic violence allegations.

Mercy Aigbe’s first marriage did not work out well. She had issues with her mother-in-law, she made it known that her mother-in-law did not want her son to marry from another tribe. Mercy was young and naïve, she moved on with her life and career and fell in love again with Mr Lanre Gentry an Hotelier.

The actress called it quits after another case of violent assault by her husband who accused her of having extra-marital affairs. Mercy made an Instagram post advising women to “say no to domestic violence” and Lanre Gentry’s replied also with a post on his own page saying, “Say no to promiscuous and irresponsible woman”. This showed a strong bridge of disagreement between the two of them.

But the beautiful thing is that the actress has refused to stay low, she has refused to let her broken home be a barrier to her life and career. She is living her life like nothing has happened. Recently, she produced movies and featured in others, like Nigerian Trade, Heaven on my mind, Lagos Real Fake Life, That which Binds us, 200 Millions, just to mention a few. Tonto Dikeh is a famous Nigerian actress, singer and philanthropist, who got married 2015 to Olakunle Churchill whom she met at a nightclub in Lagos. The marriage was blessed with a baby boy in February 2016, who she and her husband named King Andre Omodayo Churchill.

Tonto Dikeh’s marriage was problematic and complicated, she and her husband were completely different people and their happiness did not last long. The marriage collapsed based on domestic violence and infidelity. At first, Tonto Dikeh was silent about her marriage and was keeping her divorce process private, but on Women’s Day in 2017, she finally spoke about her unfortunate union sincerely.

She made a confession that her husband was an abusive husband who caused her physical and emotional pains. These and many more reasons made Tonto Dikeh back off the marriage.

Tonto Dikeh, despite her controversial status is one celebrity with a good heart. She is known to be one of the most benevolent celebrities as she is quick to help the needy. She touches lives through her NGO “Tonto Dikeh Foundation”.

Tonto went through plastic surgery, but because she like how her body looked after the successful surgery, Tonto expressed her joy and satisfaction in her new look, ready to conquer the world with a new found confidence.

The renowned actress and social media influencer has bagged some awards celebrating her humanitarian deeds such as the Creative Faith Academy Award ‘Philanthropist of the year’, the Niger-Delta Peace Ambassador Initiative ‘Peace Ambassador Award’, amongst others. She became born again in 2018 and has since held strong to her faith and has also inspired others to follow suit.

She recently launched her hair collection named King Tonto Collection in collaboration with Glee and this wonder woman is scaling higher heights unstoppably. The Nollywood actress, Ini Edo got married to an American-based Nigerian businessman, Phillip in 2008. She walked out of the marriage in September, 2014, making it 6 years of romance.

Endurance and breakup followed accusations of domestic violence and cheating. The fact that Phillip is not based in Nigeria made this union inconvenient for the actress as she had to travel to another country to see her husband. Apart from the distance between them, there were records of infidelity and domestic violence.

The union did not turn out to be a lasting one. The situation taught Ini Edo a good lesson, she became stronger and experienced much pleasant moment that made her more matured and prepared for a different life situation. She is now focusing on building her career and living a happier life. Interestingly, in 2016, she was appointed Special Adviser on Tourism to Akwa Ibom State governor, Emmanuel Udoh.

With her new role, the actress has not been visible on the big screen in recent times as she now spends ample time in Uyo, the capital of Akwa Ibom State, her home state. Award winning Nollywood screen diva, Chika Ike, is one of many Nigerian women who have managed to stand out despite growing up facing rejection from her father and family. The actress and philanthropist have faced challenges headlong and have come out with her head held high with notable achievements to boast of.

She however wasn’t lucky martially, as her marriage with Tony Ebireri lasted for only few months before it hit the rocks. She got divorced on the grounds of infidelity and domestic violence in 2013.

Ever since, the 33 year old movie producer has made remarkable achievements and impacted Nigerians. From starting up a reality TV show, African Diva Reality Show which is in its 3rd edition, to writing a book, “Boss Up”, to graduating from Harvard Business School, the actress seems resilient and unstoppable at achieving success and leaving an impact in the sand of time.