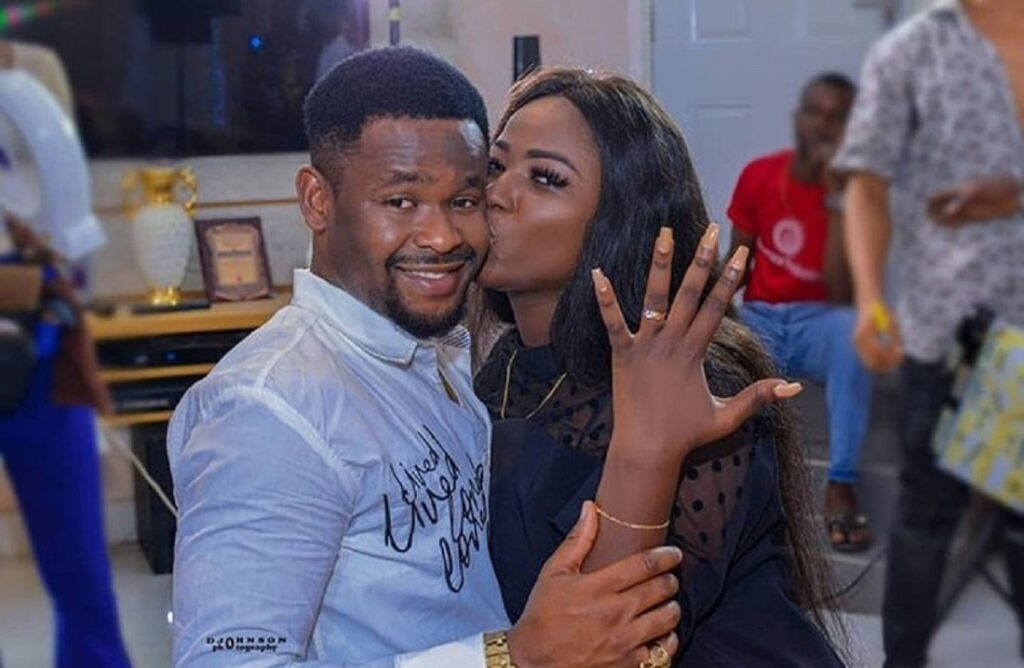 Who is Zubby Michael?

Zubby Michael is a popular Nigerian actor, movie producer, entrepreneur, and politician. He is popularly known for playing the roles of a villain or bad boy in Nollywood movies.

Zubby Michael’s full name is Azubuike Michael Egwu. He was born on February 1, 1985, as the second child of six children. His father was an entrepreneur while his mother was a teacher. Zubby Michael is currently 36 years old.

The 36-year-old actor was born and bred in Yola, Adamawa state, though he is originally from Ozubulu, in Ekwusigo Local Government Area of Anambra state.

Zubby Michael obtained a Bachelor’s degree in Mass Communication from the Nnamdi Azikiwe University in Anambra State. He debuted into acting in 2006 at the age of 21, starring in the television soap operas ‘Coded Hussle and The Generals’.

Zubby Michael’s first major movie appearance was in the movie titled ‘Three Widows’. His role as the lead character of the movie gave him much needed recognition. His appearance in the 2007 movie, ‘Missing Rib’ alongside Ramsey Nouah shot him to more prominence.

His productional debut was the movie titled ‘1st Hit’ which starred the likes of Ngozi Ezeonu, Nonso Diobi, amongst others.

Zubby Michael was appointed as the Special Adviser on Media to the Anambra State governor, Governor Willie Obiano, on November 25, 2019

Zubby Michael is one of Nollywood eligible bachelors. The actor has never been married except in movies.

Zubby Michael once dated the sister of Paul and Peter Okoye of the defunct P-Square group named Mary Jane Okoye, during the early rise of his career as an actor.

Unfortunately, the relationship only lasted for a while before they parted ways. The actor has since then remained single, keeping his private life away from the media. According to him, he is more concerned about his career at this time and refrains from addressing himself as the ‘ladies man’. The actor reportedly once admitted he has a phobia for women.

However, there have been rumours of his romantic involvement with the likes of actresses Destiny Etiko and Regina Daniels.

Zubby Michael and P-Square’s sister Mary Jane Okoye had a promising relationship until things turn sour between them. The ex-lovers dated for two years after they met at the wedding reception of Nollywood actor Mike Ezuruonye in May 2010.

According to reports, they broke up based on the different interests they had in life. Mary was ready to settle down and get married, while the actor was more concerned about his career which was just starting to take off.

After their breakup, Mary Jane Okoye moved on to get married to another Nollywood actor Emma Emordi, while Zubby Michael diverted all his attention towards his career.

Mary Jane Okoye got married to Nollywood actor Emma Emordi after her breakup with Zubby Michael. They got married on March 6, 2014, in Asaba, Delta State.

Unfortunately, the marriage crashed after six years and they parted ways in 2020. According to Mary Jane, her estranged husband was a serial cheat and a thief. She also made it known that Emma Emordi infected her with an STD at some point in their marriage.

Zubby has been rumoured to be romantically involved with Nollywood actress Destiny Etikoseveral times. Some of the reports even claim they are married.

According to reports, they have both been caught on camera sharing passionate kisses in public, with Destiny flaunting an engagement ring at one time. It was later discovered that the two were on a movie set together where they played romantic partners.

The rumour of Zubby Michael and Destiny Etiko’s intimate affair got escalated after the actress shared a picture of herself and Zubby from the set of the movie ‘Royal Dominance‘. Her caption on the picture which read ‘Eze and his wife’ignited more fire to the speculations.

However, Destiny Etiko has blatantly debunked the rumour of her being Zubby Michael’s lover, stating that though she shares a very special bond with the actor, they are not romantically involved.

Zubby Michael, on the other hand, has never for once said anything or addressed his relationship with the actress.

The rumour of their affair hit the media after Regina shared a picture of herself and Zubby on her Instagram page.

However, it was later discovered that the Nollywood stars were only posing for the gramand had nothing intimate going on. Zubby Michael and Regina Daniels have reportedly been friends for a long time and have both featured in several movies together even before Regina got married to her billionaire husband, Ned Nwoko.

According to verifiable information, Nollywood actor Zubby Michael has no biological children, as of the time of publishing this post.

Zubby Michael was once speculated to be the biological father of the small-sized Nollywood actor, Chikamso Ejiofor popularly known as ‘Ozonigbo’.

The speculation of Zubby Michael being the father of the diminutive actor hit the media after Zubby celebrated one of his birthdays in grand style.

However, it later became known that Zubby Michael is not the biological father of Ejiofor, though he has adopted the actor referring to him as his ‘Nollywood son’.

Chikamso Ejiofor is often compared to the likes of Nollywood comic actors, Chinedu Ikedezie and Osita Iheme popularly called ‘Aki and Pawpaw‘ because of his diminutive size. His date of birth is recorded as March 6, 1994, making him 27 years old.