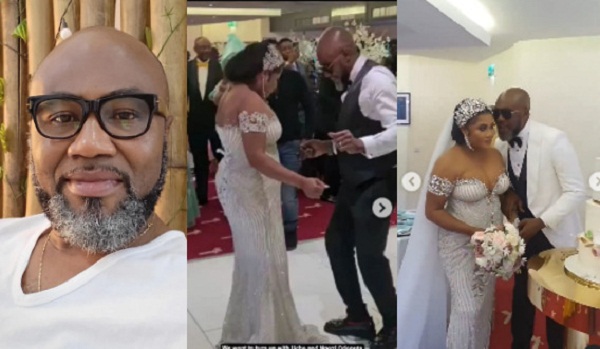 Nollywood actor, Uche Odoputa has finally tied the knots with the love of his life.

The glamorous event which took place in London saw the 52-year-old actor smiling all through as he becomes a husband officially.

Uche Odoputa was close to becoming an A-list actor. He had a huge fan base and was on the verge of becoming as  prominent as the likes of  Emeka Ike, Ramsey Nouah and Jim Iyke.

Unfortunately, he altered the course of his career. In 2007, he was arrested for trafficking drugs and subsequently, he was imprisoned for two years and three weeks.

The Orlu, Imo State-born actor, said he wasn’t making enough money and some individuals took advantage of his desperation and introduced him to the drug trade.

Recall that a few weeks ago via his  Instagram post, the Nollywood star noted that his father has been in the kidnappers’ den for two weeks.

Sharing a picture of his father, he asked his colleagues and fans to join him in praying for his dad’s safe return.

Uche’s Instagram post read, “Friends please join me in praying for my father’s safe return from the hands of kidnappers that took him over two weeks now. Mr Kenneth Odoputa.”