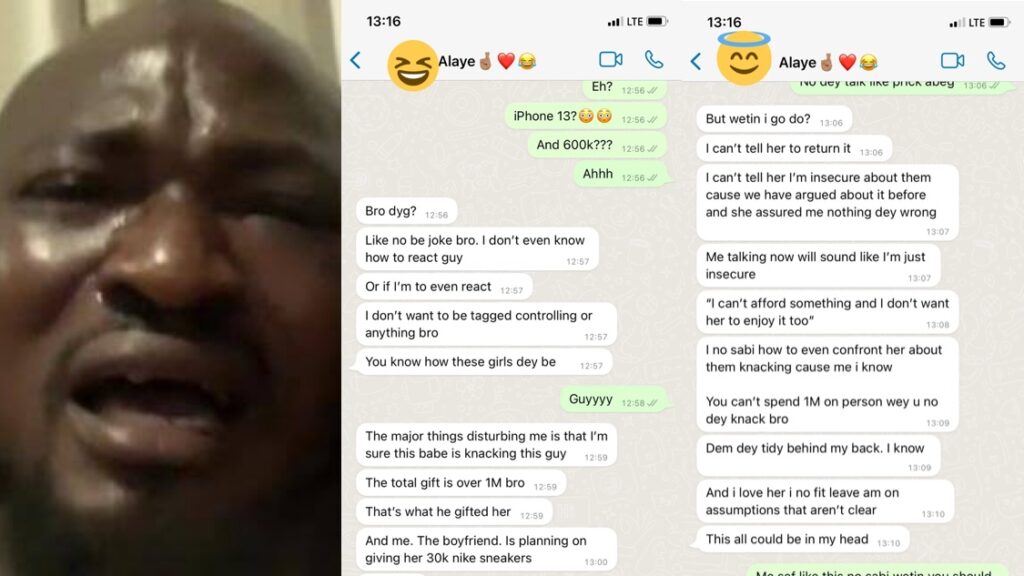 The story of a Nigerian man and his girlfriend is serving rounds on social media as netizens have a couple of things to say about their situation.

The young guy, in a chat with his friend, opened up on how he feels worthless after his girlfriend received iPhone 13 and 600k as a birthday gift from her male best friend.

The gentleman’s close friend, a Twitter user with handle, @thesameremy took to his page to share screenshots of their conversation where the former shared that he feels like ‘worthless man’ about the situation.

So yesterday was my guy’s babe’s birthday and her “best friend” gifted her an iPhone 13 and 600k. My guy doesn’t know how to feel about this/ feels “worthless”

In their chat, the guy whose girlfriend was gifted exotic gifts, revealed that he is quite convinced that his girlfriend is sleeping with the so-called ‘bestie’ because of the kind of gift she received.

He went on to share with his friend that he had planned to gift his woman Nike sneakers that’s worth N30K for her birthday, however, it is nothing compared to the worth of the gifts she received from her male best friend.

The quite distraught young man then said he regretted not becoming a fraudster to be able to spend lavishly on his babe.