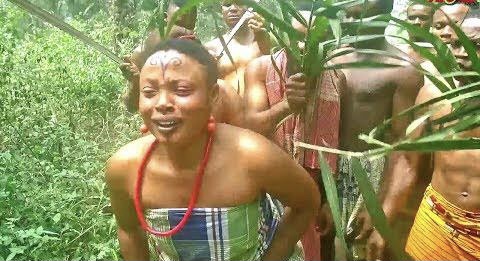 A Nigerian has dragged her husband to court after she was asked to dance n*ked in the village over adultery.

The woman, a trader called Sandra Iyenanye, on Tuesday approached an Igando Customary Court, seeking dissolution of the long-distance marriage to her husband, Mr Vestus Iyenanye.

The petitioner, a resident of No. 8, Jaiyeoba St., urged the court to grant her divorce from her husband on the grounds of abandonment, cheating and negligence.

“My husband who is based in Austria has since abandoned the home, he has come home a total of four to five times since our marriage in 2019, and he has beaten me up once with a belt because of another woman.

“I found out he was seeing another woman in 2010 and I confronted him only for him to beat me up with a belt, I later ran to my uncle’s house for protection but my uncle mediated and settled our misunderstanding and my husband promised not to lay his hands on me again.

“After settling, he travelled back with a promise to come back a year later but he did not, so due to frustration we exchanged words on the phone; his family held on to what I said and termed it abominable and labelled me a bad wife.

“Unfortunately, the next time he would come back was 2022, but before then he stopped sending money for upkeep for our children and left all responsibilities to me; all efforts to speak with him proved abortive.

“The one time I called, it was a lady that picked the call and she later told me I was waiting for my husband in vain and I should better move on, she said all types of spiteful and hurtful words to me which my husband didn’t see any wrong in,” she said.

She further told the court that throughout the period her mother was sick and later died, her husband did nothing about it neither did he call or check up on her.

“He later sent meagre money after I expressed my displeasure, and in his words, he said I should better be grateful as he didn’t even have money to send to me; that the money he sent was borrowed from his girlfriend.

“When I saw that my husband was not trying to make the marriage work nor even attend to my sexual needs, I had a one-time affair, his family said I must dance n*ked in the village square as atonement and pay the sum of N100,000.

“After the whole rites then I can be free to go, I asked my husband if he would still accept me, and he said NO, because of this I want a divorce from him as I do not even intend to perform the rites either; it’s best we both go our separate ways and I be granted custody of the children,”Mrs Iyenanye said.

Standing in for the respondent was his brother, Mr Cobina Iyenanye, who had good things to say about his brother’s wife and sang praises of her.

“I commend her resilience and patience, she’s a good woman, she has tried, she is not a bad person; I only agreed to come to the court because I want them to separate without fights and all dues be given to the woman,” he said.