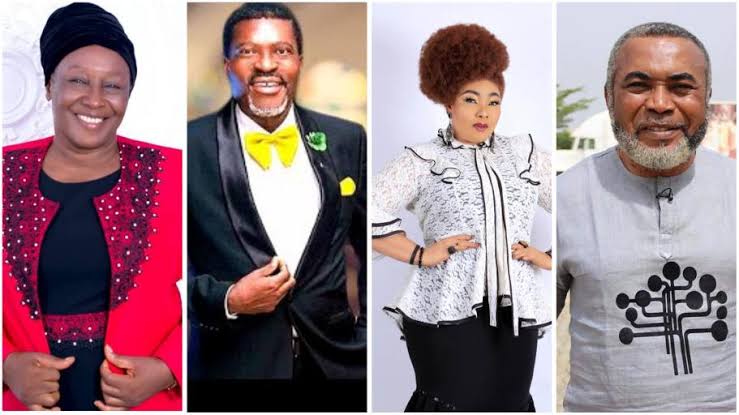 The love of God can make people do things so incredible, like a Nollywood actor becoming born again and accepting the call of God upon their lives, and abandoning their worldly lifestyles, give up bad habits, and make major adjustments in their lives.

Here are 7 Nollywood celebrities who left acting and became pastors. Kanayo Modestus Onyekwere aka as Kanayo O Kanayo, a veteran Nollywood actor. He is very famous for his love of money ritual in movies. Kanayo O Kanayo has been spotted preaching the word of God at Christ Mission Worldwide Church in Egbeda, Lagos State. He has however left the movie scene for gospel ministry. It is not certain if he has finally bid farewell to acting. Elizabeth Benson aka Liz Benson is a veteran Nollywood actress, television personality and philanthropist. She began acting when she was just 5 years old. In 1994, she was trapped in the middle of a scandal due to her role in the movie titled Glamour Girls which prompted her to leave the movie scene for a while. In 2009 she married a man who is a Bishop at the Rainbow Christian Assembly in Warri, Delta State and was ordained as an evangelist. Liz and her husband pioneer the affairs of the church together. Zack Orji is a Nigerian actor, director, filmmaker and movie producer. He came to spotlight in 1991 in a movie titled Unforgiven Sin.  He was the President of the Actors Guild of Nigeria, AGN. Zack is popular for his role as a Pastor in Nollywood movies. So it wasn’t a surprise when he got born again and became a pastor. He was later ordained as a full-time evangelist at the Christian Central Chapel International (CCCI). He is now actively into evangelical activities all over Nigeria. Eucheria Anunobi is a Nigerian actress and movie producer famous for her high class role in a movie titled Glamour Girls and Abuja Connection. She however took the world by surprise when she gave her life to Christ. She stated that being a pastor doesn’t stop her from promiscuous roles. She became an ordained evangelist on 5th February 2012. She was ordained at the Fresh Oil Ministry Church, Egbeda, Lagos State by Pastor Psalm Okpe. She counsels youth in the church and travels spreading the word of God. Majid Michel is a Ghanaian actor. He made his Nigerian Nollywood debut in the 2009 romantic drama, Emerald, playing a leading role alongside Genevieve Nnaji.  Majid is a born-again Christian. He is one the artist in this list to merge both acting and evangelism. Unlike his other Nollywood counterparts that quit acting completely after given their life to Christ, Majid Michel still acts but very selective with roles. On 4 October 2016, he was a guest minister at a local church where he shared the word and performed deliverance on people. Patrick Uchenna Attah is a Nigerian actor, producer, director, television personality, a music star, model and a philanthropist. He is known for his lover roles in movies like Glamour Girls. He rose to stardom in 1994. The actor lives in Hamburg, Germany. He is now an evangelist, though he doesn’t mount the pulpit. He is actively using his social media platform to deliver his sermon/messages to everyone. Patience Ozokwor is a veteran Nollywood actress, musician, fashion designer and gospel singer. She is famous for her wicked stepmother, wicked mother in-law roles in movies. In 2019, she was seen ministering in a church in Lagos, St. Peter’s Anglican Church in Alaba, Lagos State. Patience Ozokwor ministered about personal her life and personal encounter with Jesus Christ. It is not certain if she has totally abandoned acting for evangelism or undertaken both acting and evangelism.