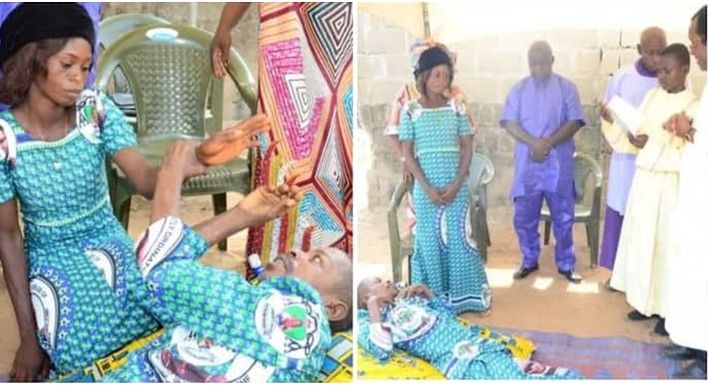 True love it is said can be found in the most unlikely places and circumstances and this has been proven by a couple that recently tied the knot.

A 27-year-old lady, Christiana, wedded her 45-year-old bedridden heartthrob, Terkimbir Benjamin Tyough on Saturday, December 11 and their union has shown that there is someone for everyone.

Benjamin from Gboko Local Government Area of Benue State worked as an electrician before he became bedridden. He injured his spinal cord after falling from an electric pole early in March.

He resigned to fate after fruitless efforts at raising the N1.5 million required for a surgery to restore his health.

Speaking with BBC News Pidgin, Christiana said she has great love for her husband despite his situation and is ready to remain with him to the end.

The mother of three boys described her husband as a good man, stressing that they have been surviving thanks to assistance rendered to them by their neighbours.

”My husband is a good man and I am ready to live with him forever because of the love I have for him,” Christina said.

”Since he had an accident, neighbours have been the ones supporting us because I don’t have work and my husband was the one providing for the family before the accident,” she added.

Showering encomiums on his wife, the bedridden man said he would have given up the ghost without his wife.

”Without my wife, I would have died with this my condition, I married a good wife and I cannot leave her. Our love is forever”, Benjamin said.