Some fans of the big brother naija reality show have stated that TV star, Liquorose is a mother who hid details of her child from the public.

“Liquor fans attacking me in my DM, please ask your favourite to tell you the truth, she has a baby. I was shocked she didn’t mention it in the house, waited till the end of the show,but not even one talk of her child, y’all should free me biko”

“Liquorose hid her child from the public, and Emmanuel also hid his girlfriend. I stan favs that are private.” 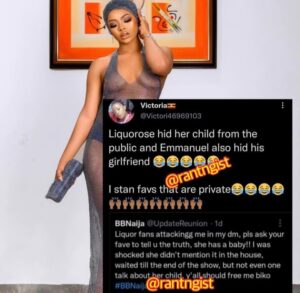 It was actually a savage reply she gave when Marians and Liquolions were having Twitter fights! That’s what they actually said to cause problems and she only quoted what they said…

Truth leave liquorose alone she hasnt even been online still yet bloggers won’t leave her to rest nawa oo ,we know don’t like her stop posting her

But is true liquorose has a child, but is not a bad thing now. Children are gift from God. Rant is true

Same they said about erica back then. If at all it’s true, it is noone’s business.